CINCINNATI, Ohio – Reading Royals forced an overtime using their good third period offense but failed to capitalize in the extra period. Mike Embach scored a game-winner at 16:24 in overtime to give the Cyclones the win 3-2. The Cincinnati triumph cut Reading’s best-of-seven series lead in half 2-1.

The Cyclones will return to U.S. Bank Arena on Friday, May 10 for Game 4 of the best-of-seven series.

http://www.cycloneshockey.com/news/1078/cyclones-triumph-in-overtime-over-reading-3-2/
at 9:10 PM No comments: 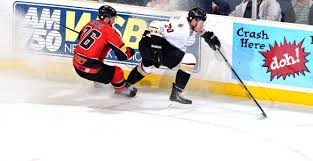 The first period was a defensive battle neither team was able to score, the Cyclones broke the scoreless drought just 2:49 into the second frame when McFarland beat Glads goalie Louis Domingue on the power play with a wrist shot from the slot to give the Cyclones a 1-0 edge.

Mathieu Aubin made it a two-goal game at the 14:11 mark on another power play. Gwinnett was held to nine shots in the second period, while Cincinnati uncorked 16.

The 3rd period opened with Gwinnett trailing 3-0, but Cincinnati didn't release the pedal a bit they added two more goals on 14 shots in the final to wrap up the 5-0 victory. The Gladiators were limited to 16 shots in the final two periods while the Cyclones tallied 30.

A reader emailed me his link, you may want to check them out:


Visit his site for authentic sports memorabilia.
at 6:42 PM No comments:

Josh Shalla reassigned to the Cyclones 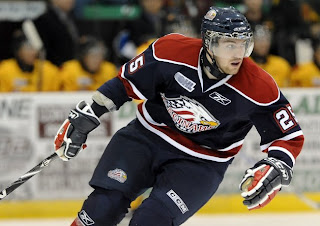 The Admirals have reassigned forward Josh Shalla to the Cincinnati Cyclones of the ECHL. He was the 2011 fourth round pick of the Nashville Predators. He was one of Cincinnati’s top offensive players during the regular season.
at 2:15 AM No comments:

Kevin Henderson a former Cincinnati Cyclones forward became the eleventh Cyclones alumnus to make his NHL debut when he played for the Nashville Predators last night.

Henderson, a fourth year pro, logged nearly 13 minutes of ice time for the Predators in their game against the Chicago Blackhawks. He also scored a go-ahead goal in the first period. Nashville went on to lose the game in overtime, 5-4. He skated in two games for Cincinnati during the 2011-12 season, but did not record any points.

After a practice day today, the Cyclones will reunite with Gwinnett Gladiators on Sunday evening for Game 2 of their best-of-seven series. Fans can hear all the action of the contest on the Cyclones Radio Network (FM 100 The FAN, CyclonesHockey.com, America One) at 5:45pm with the opening face-off to follow at 6:05pm.

The Cyclones will return to U.S. Bank Arena on Wednesday, April 24 at 7:30pm for Game 3 of the series. 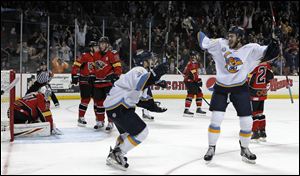 The Cincinnati Cyclones rallied in overtime to bag a 4-3 win against Toledo Walleye in the ECHL Eastern Conference quarterfinal series.

Cincinnati's Team captain Mathieu Aubin game-winning goal at 3:05 into overtime ended Toledo's season series 4-2. They will advance to play in the second round against Gwinnett.

a professional hockey team based in Cincinnati, Ohio. The team is a member of the ECHL. Founded in 1990, the team first played their games in the Cincinnati Gardens and now play at U.S. Bank Arena.